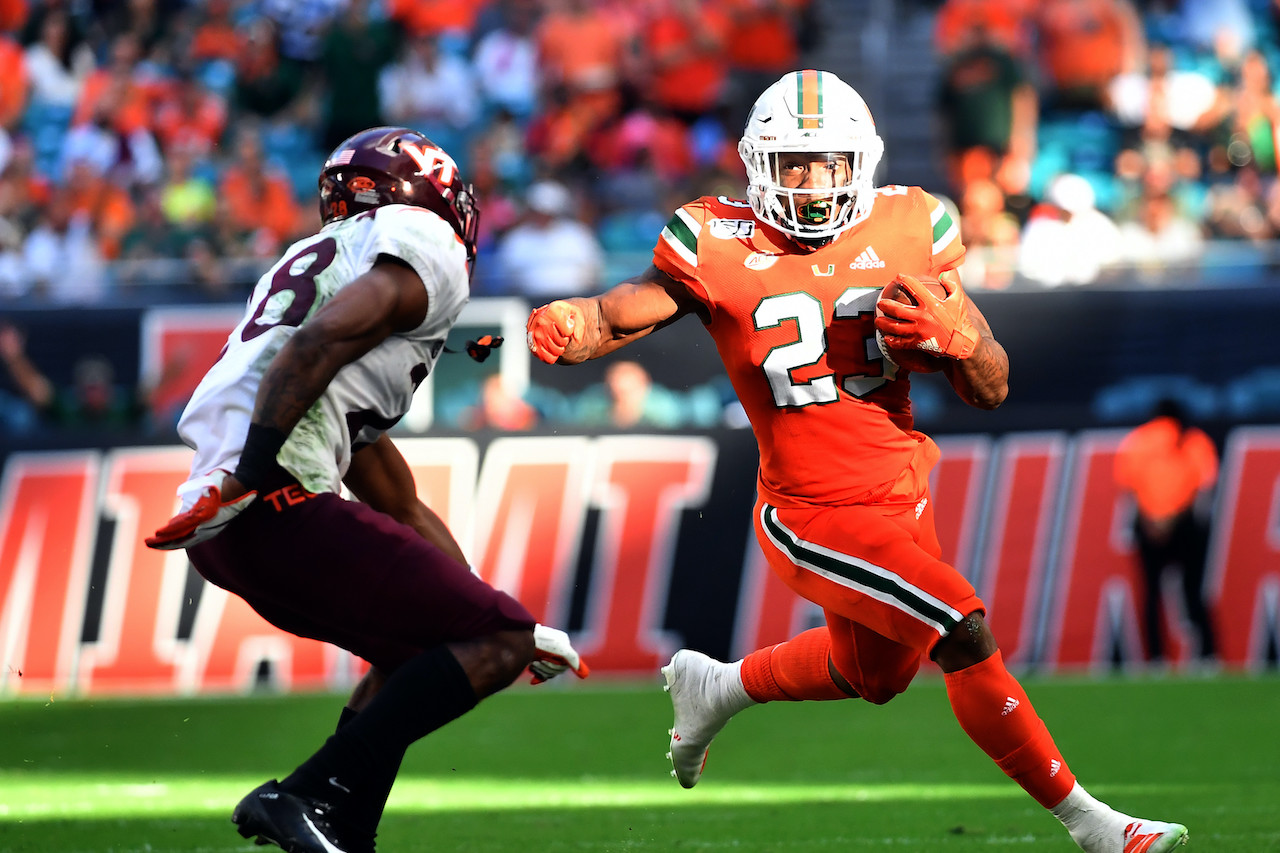 One of the all-time rivalries in college football, Miami & Florida State have provided us with some of the greatest and most intense games over the last three decades. The rivalry has taken a back seat for viewers during recent history as both teams have struggled (neither have made a BCS/CFB appearance since 2015) making this year a huge opportunity for one to not only grab a victory, but also gain a huge jump on the 2021 recruiting train.

Miami has looked to turn the recent history around after a nice 2-0 start to the season, coming off an impressive offensive performance over Louisville in a 47-34 victory on prime time television last Saturday night.  The addition of D’Eriq King has been enormous as expected, the transfer from U. of Houston has been terrific so far (18/30, 325 Yards 3 TD’s last week.) King’s ability to move the pocket & break out into space with his legs has and will continue to make things a nightmare for opposing defensive coordinators (noted that FSU head coach Mike Norvell is still not with the team.)

Along with this Miami has shown some flashes from the past as they have connected on four different touchdown drives of five plays or less, each in under 90 seconds. The ability to spread the field & allow King to make quick decisions has been effective so far through two games for the Hurricanes and this shouldn’t slow down anytime soon.

Florida State has been struggling on & off the field starting with the Jameis Winston days to more recently the disappointing short lived tenure of Willie Taggart, who took over at FSU on December 5th, 2017 and didn’t last two full seasons with the Seminoles. Florida State missed a Bowl game for the first time since 1976 and year two was abysmal, going 4-5 through the first nine games of the season before being fired and giving way to interim coach Odell Haggins for the rest of the 2019 season.

In comes Norvell and already there is a changing of the times with the move from Memphis this offseason, where he had great success on the national scale. Despite the Week 1 loss to Georgia Tech, the culture is adapting and Norvell has already shown he has a terrific recruiting reach. On top of that, he is a passionate recruiter in & out of the state of Florida as he continually found talent across the board for the Tigers.

James Blackman will need to show big signs of improvement if this team expects to compete this season & through Week 1 he is off to a less than ideal start. Blackman went 23-43 for 198 yards and also threw a touchdown pass and interception. I would call his opening game performance less than stellar.  The key is going to be if La’Damian Wood or Jordan Travis will step up in the backfield and help not only take the pressure off Blackman but also provide threats on the ground and in the air streaking. Florida State returns 11 defensive starters from last season, the problem being that this defense has stuck on the field so much in recent history that they have been so worn out most games before the 4th quarter ever started. What this does is put even more pressure on the offense. Add to this a complete lack of creativity at times at times offensively & it can lead to a recipe for disaster as shown with a combined 18-21 record since 2017. The Florida State offense has looked great at times, but will be heavily reliant on the Seminoles to pick up first downs and drain some clock, forcing this Miami defense to stay on the field.

This is a season for Miami to make its mark and regardless of the final season standings I think they want to dig in to prove who the better of the two teams is in the 2020 rivalry. Give me the Hurricanes in a possibly higher than expected scoring game as Miami’s offense has looked great early and even in a nice victory last week, the Miami defense allowed over 500 yards of offense & 29 first downs. Hurricanes to the bank.