One of the biggest storylines out of Miami this season has been “Who is going to fill the role vacated by Jarvis Landry?” Danny Amendola and Albert Wilson were both brought in and one of those two were expected to emerge as the favorite for targets on the team.

Week 1 brought an unlikely target leader for the Dolphins as Jakeem Grant emerged, catching 5-of-7 targets for 38 yards. Grant also did damage on Special Teams, returning a kick for a touchdown. Kenny Stills was the clear WR1 for Miami this week, however, as the deep threat ripped off 4 catches for 106 yards and 2 TD’s. 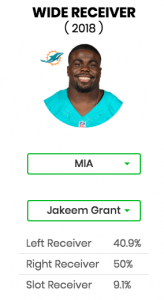 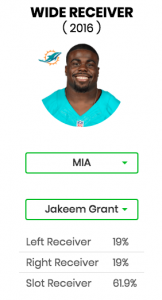 There is still a lot to figure out with this receiver depth chart, however, and it’s really still completely up for grabs who will take ahold of a leading role. Kenny Stills is the only player really locked in on the team. While Parker should regain his spot on the depth chart when healthy, Grant could push him for work and it’s not out of the question that he sees work in the slot in three wide sets. If Grant continues this trend of consistent target share, he could provide sneaky WR3 value coupled with his Special Teams usage. Keep an eye on him moving forward, he could become a great buy if he breaks out for a big game soon.