With Jimmy Garoppolo lost for the season, C.J. Beathard is now the man under center for the 49ers once again. Hand-selected by the current Kyle Shanahan regime, Beathard is a former third round pick out of Iowa who performed much better last season than people give him credit for. The team actually traded up in last season’s draft to select him. 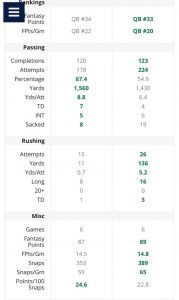 It was thanks to that rushing cushion that Beathard actually finished with more average fantasy points per game last season (14.8) than Jimmy Garoppolo (14.5). Jimmy G is clearly the better passer between the two but even his 7-5 TD/INT ratio last season wasn’t all that great.

When you look at Beathard’s passing stats overall from last season, they were admittedly average-to-below average, however a stand out was his 40% deep ball completion percentage which ranked 9th best amongst all QB’s last season per PlayerProfiler.com. Beathard was more of a dink and dunk passer but this shows he has the ability to air it out which will come in handy when you have a deep threat like Marquise Goodwin on your squad.

Beathard is a classic case of not great in real life but a decent option in fantasy. He had an average fantasy finish of QB15 in his 6 week stint last season, highlighted by a top-5 performance in Week 10 vs the New York Giants. Last week, he finished as the QB17 throwing for 298 yards with 2 TD’s and 2 INT’s. He gives you kind of that old school Blake Bortles vibe where he is a worthy spot starter and could be a king of garbage time as the 49ers will likely be playing from behind often. If you’re in 2 QB leagues, 14+ team leagues or streaming QB’s in general, Beathard is worth considering in plus matchups.