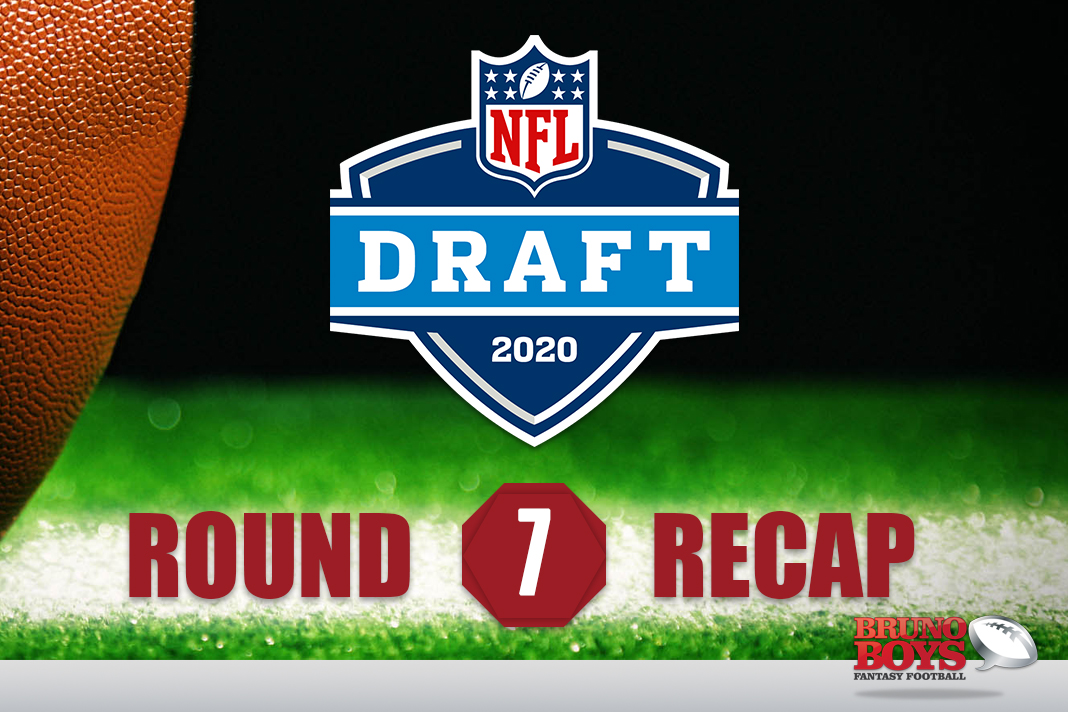 Here are the notable picks in Round 7.

A converted quarterback into a receiver in the college game. His big size serves him well as a wideout but he lacks the speed to be a downfield threat. Short yardage situations and red zone is where we’d likely see Jennings in his rookie season.

In need of more pass receivers, the Chargers picked up Ohio State’s possession receiver for the last four years. He finished his time with the Buckeyes with 201 receptions for 2,332 yards and 20 touchdowns. He’ll translate into the NFL as a slot receiver and help move the chains, but a downfield threat he is not.

Benjamin is the lone skills player that the Cardinals picked in the draft. Has nice moves to avoid tackles and can catch the ball too, which is what the Cardinals prefer in their backs now. He’ll compete with Chase Edmonds for snaps.

Ryan Tannehill is firmly in the driver’s seat of the Titans’ offense. But with Marcus Mariota out of the building, the Titans needed new bodies in the quarterback room.

Kyle Long spent another season on the sideline injured and the result was a veteran offensive line that underachieved. It’s time to get some new blood and coach them up.

Kyle Long spent another season on the sideline injured and the result was a veteran offensive line that underachieved. It’s time to get some new blood and coach them up.

You can never overlook a low-round offensive line pick by the Patriots as they always manage to turn a nobody into somebody. It’s clear that Bill Belichick and Nick Caserio had a strategy to address the defense, the offensive line and their tight ends with the draft.

DiNucci was redshirted in his first season (2015) and then he played two seasons at Pitt before transferring to James Madison. where he started 29 games, completed 70 percent of his passes for a total of 5,716 and 45 touchdowns (29 in 2019). Cooper Rush is currently Dak Prescott’s backup but DiNucci is going to compete.

A contrast to Drew Brees, Stevens, who transferred to MSU after four years with Penn State, stands at 6-5 and is athletic like Taysom Hill, but perhaps another project for Sean Payton in case Hill leaves the house.

Hey, it’s backup quarterback time. Stanley is a solid three-year starter at Iowa who averaged just under 3,000 passing yards in each of those seasons. He completed only 58.3 percent f his passes and had a down years statistically in 2019, but still finished his career with 68 touchdowns.

The Bucs add a speedy running back with 4.42 speed (third-fasted in RB group at the Combine) with big explosion that translates to the games.

An elusive hybrid player who has played quarterback in RPO type play sets, but has also played slot and running back. Will likely contribute early as a third down back or in RPO packages, but Perry can play, the big question for the Dolphins is where?

Kicked in the MAC Conference and in four seasons was 112-of-115 extra points. Since becoming a starter in 2017, Sloman converted 48-of-60 field goals to finish with a 80 percent conversion rate. Greg Zuerlein left in free agency to the Cowboys and so Sloman will battle Lirim Hajrullahu for the job.

Anchrum doesn’t have the height or length to play the edge and will factor as an interior lineman to develop.

Seahawks pick another tight end, this time it’s another LSU product, the final one of the draft. Sullivan clocked the second-fastest 40 for tight ends in combine history. He only had 12 catches for 139 yards in his senior year (he converted from wide receiver) but he somehow was picked instead of Thaddeus Moss.

The Broncos just keep adding talent on offense and it will be hard not to be hyped with where they’re headed. Cleveland has size and you can’t catch that. Everything else though needs to be coached up and made consistent. We’d look at Cleveland being a two or three year project, given the class of receivers that has joined this squad in this draft.

And that wraps up our live draft coverage. Thanks for reading and stay safe wherever you are!