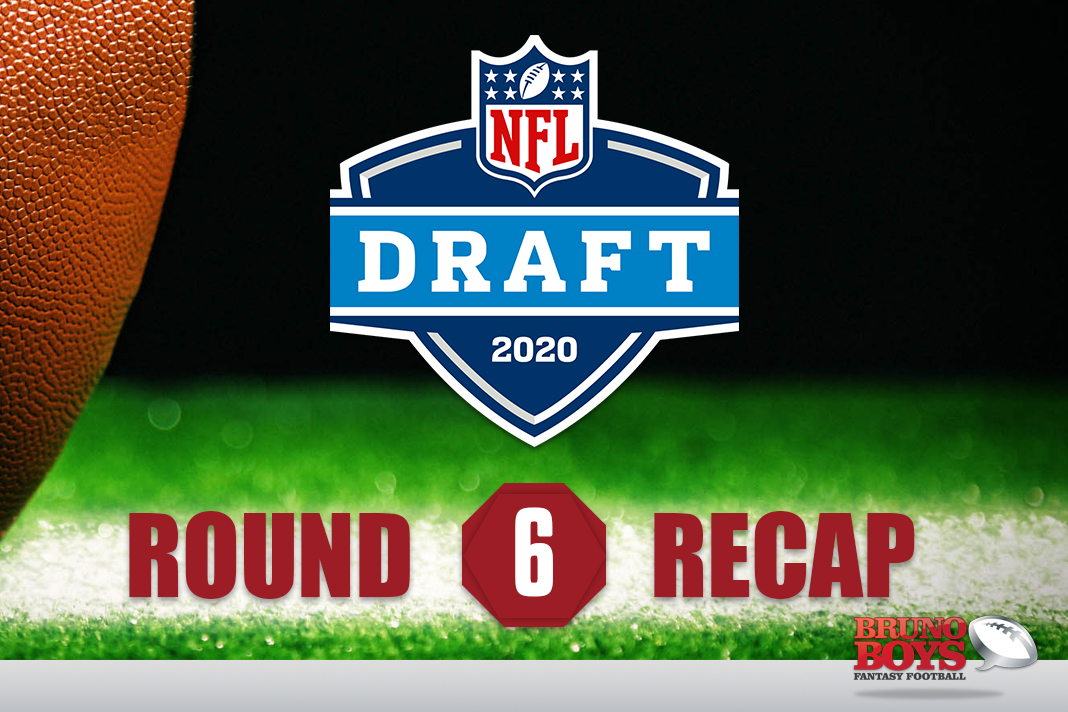 Here are the notable picks in Round 6.

Cincinnati is building around Joe Burrow the right way. Adeniji is the first offensive lineman the Bengals have picked in this draft and he’s a run blocker and four-year starter who played in the SEC.

New England has not selected a quarterback, running backs or receivers. But they have been building up their defense, tight ends and now offensive line in this round. Onwenu in particular is a quality interior lineman who excels in the run game.

Herron will compete for immediate playing time at the tackle position for what looks like a revamped New England offense.

With the Browns set with two great wideouts in Jarvis Landry and Odell Beckham Jr., a third receiver was needed after the team did not offer an extension to Rashard Higgins. People-Jones has the good size and speed numbers with good hands. He’s a little sluggish through his routes and struggled with injuries in his junior and final season at Michigan to put up big numbers. He’s raw and needs to be coached up but he had the tools out of high school and just needs to find his path back towards his potential.

The top-ranked kicker in this year’s draft, Bass has a booming foot with an easy range of field goals made between 30-50 yards. He hit on 100 percent of his extra points and 71.4 percent (20-of-28) of his field goals as a redshirt senior.

Luton’s a big specimen at 6-7, 224, but the Jags are trying to see if they can catch lightning in a bottle again by getting a quarterback late in the draft. Broke out as a senior, completing 62 percent of his passes for 2,714 yards and 28 touchdowns playing against the Pac-12. Prior to the draft, the Jags sent Nick Foles up to Chicago while committing to Gardner Minshew. We don’t expect Luton to challenge, but then again, the same was probably said about Minshew last year.

The Niners picked up a blocking tight end. Which should benefit what looks to be a ground heavy approach in 2020.

A value pick for the versatile Runyan who comes from a good program, playing against good talent. He’s started at left tackle but has also played on the right side and at guard. That versatility will help move around an offensive line that seems to always have an injury deep in the season. He has good drive and pop off the snap and plays like a wall.

Hanson and Stepaniak are good depth selections and a commitment to protecting Aaron Rodgers and blowing open holes for Aaron Jones.

Hanson and Stepaniak are good depth selections and a commitment to protecting Aaron Rodgers and blowing open holes for Aaron Jones.

The Eagles continue to hope strength is in numbers as they drafted their third receiver in this draft. Watkins is a gym guy because he had a blazing 40 at the combine and can get to that gear quickly after the catch. It’s getting the catch that is where the inconsistencies lie and that’s why he’s lasted as long as the late 6th round.

No. 201 Baltimore Ravens trade up the 6th round with Vikings to select SMU WR James Proche

Proche is another undersized receiver who catches with his hands an dynamic big play ability. This is the second receiver the Ravens have drafted for Lamar Jackson. It’s an area they need to grow as opposing defenses are expecting them to run on most plays. It makes it hard to tell any fantasy owner to take the Ravens receivers until the first month of the season has passed and we see if any of these receivers (veterans included) will make an impact consistently.

Having already drafted Gabriel Davis, Hodgins impresses with his long wingspan for the goal line plays and near the sidelines. His size keeps him from being a burner but he’s the perfect type of receiver who should excels in the red zone.

Already added Michael Pittman Jr., the Colts added another 6-4 receiver in Patmon, who could develop into a goal line threat with basketball type plays.

The Seahawks need another receiver to contribute besides DK Metcalf and Tyler Lockett. David Moore is the third receiver but lacks the ability to put the defense on its heels. Swain played four years at Florida but wasn’t a regular contributor until 2019 when he caught 38 passes for 517 yards and seven touchdowns.