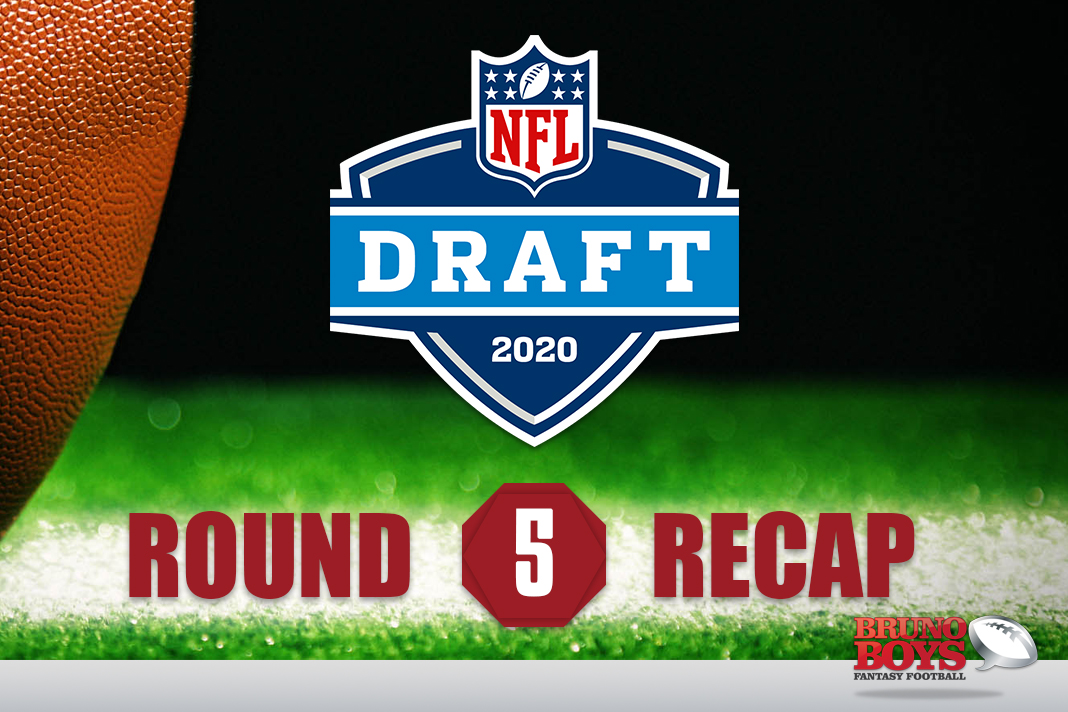 Here are the notable picks in Round 5.

151 Los Angeles Chargers select Virginia WR Joe Reed
After Keenan Allen and Mike Williams, the Chargers are rolling with a group of backup receivers that don’t have even a combined total of 10 NFL catches. Reed is a special teams threat as a tackler and dangerous kickoff returner, leading the FBC with a 33.2 yards average. That doesn’t necessarily translate to his route running but the team needs to find additional playmakers.

153 San Francisco traded Matt Breida to the Miami Dolphins for 153rd overall pick which was used on West Virginia OT Colton McKivitz
This is more bodies to help replace Joe Staley and shore up the offensive line with Trent Williams, which went down during the 4th round.

159 New England Patriots select Marshall PK Justin Rohrwasser
After running through several kickers and ending Stephen Gostkowski’s long run as kicker, the Patriots entered the draft without a place kicker on the roster. Rohrwasser was 96.3% on his extra points and 78.6% on his field goals during his two years at Marshall. His longest field goal made was 53 yards in 2019.

161 Tampa Bay Buccaneers select Minnesota WR Tyler Johnson
Johnson catches over the shoulder well and runs routes well. With the talent already installed, the Bucs lack a quality third receiver after Breshad Perriman left. While his hands are on the small side, it’s hard to look past his production as a junior and senior against Big Ten talent. Looking at just his last two seasons, Johnson had 164 catches for 2,487 yards and 25 touchdowns. He is gunning for that WR3 spot for Week 1.

165 Jacksonville Jaguars select Texas WR Collin Johnson
Jaguars pick their third receiver, which tells you what they think about their current crop for Gardner Minshew. What jumps out about Johnson is his ability to win 50/50 balls and his body control in keeping his feet in bounds. His body moves in a smooth manner but lacks some of that early burst and separation that elite receivers are able to make.

161 Detroit Lions pick Wisconsin WR Quintez Cephus
Cephus’ highlight reel shows a receiver with early separation speed and great body control. He can win 50/50 balls and locate the ball over his head and shoulder. What you don’t see is his numerous drops.

167 Buffalo Bills select Georgia QB Jake Fromm
There was no question that Fromm was going to get selected but the former Bulldog’s big arm is going to push Allen in camp. Fromm has been knocked for his lack of winning intangibles but that doesn’t mean he couldn’t come in and make some noise.

Allen as a leader is unquestionable, he makes plays to win games, but his pure quarterback play still leaves much to be desired. This is an interesting landing spot for Fromm but like many of the quarterbacks picked after the top of the first round, he was chosen to be a backup but the question is if they challenge at some point given how physical their starters play.

168 Philadelphia Eagles trade for WR Marquise Goodwin and pick Boise State WR John Hightower
The Eagles continue to add help in this position. Given how often Alshon Jeffery and DeSean Jackson get injured, it’s easy to feel like the Eagles are flooding their camp with receivers and hope that they’ll find the next crop of receivers that will transition into starting roles. Earlier in the day the Eagles traded with the 49ers and received veteran Marquise Goodwin.

171 Houston Texans finally pick a receiver in Isaiah Coulter
Like the Eagles, the Texans are trying to find more help at receiver, but then again, Philly didn’t trade away one of the best receivers in the league for an injury prone running back. This is the first receiver that the Texans have selected in this draft and Coulter is a big play waiting to happen, much like Will Fuller.

Btw, I happen to find the below clip of Houston Texans head coach Bill O’Brien being caught on camera frustrated about something because at some point, we’ve all been here following this draft. Let it amuse you in these long stretches of the late rounds.

172 Detroit Lions select New Mexico State RB Jason Huntley
Huntley is coming off a 1,000 yards season and two straight seasons with at least 10 total touchdowns. Huntley can catch the ball, as he has 126 receptions in his last three seasons. Perhaps this pick will allow the Lions to finally get a young dual threat back instead of recycling Theo Riddick. Seriously though, we can imagine Huntly paired up with D’Andre Swift in a fresh Lions backfield.

173 Chicago Bears pick Tulane WR Darnell Mooney
With the Bears moving on from Taylor Gabriel, a slot receiver was a need they could fill in the draft. Mooney is an undersized receiver at 5-10, 176 lbs. but he does have pull away speed once he secures the ball. Will be interesting to see if he can handle the physical corners and get back on track after initial contact.

176 Minnesota Vikings select Miami WR KJ Osborn
Osborn transferred to Miami from Buffalo and found it a step up in competition. He still managed to get 50 catches from his last year at Buffalo to his one year in Miami. His production did go down but has the solid tools to be a contributor.