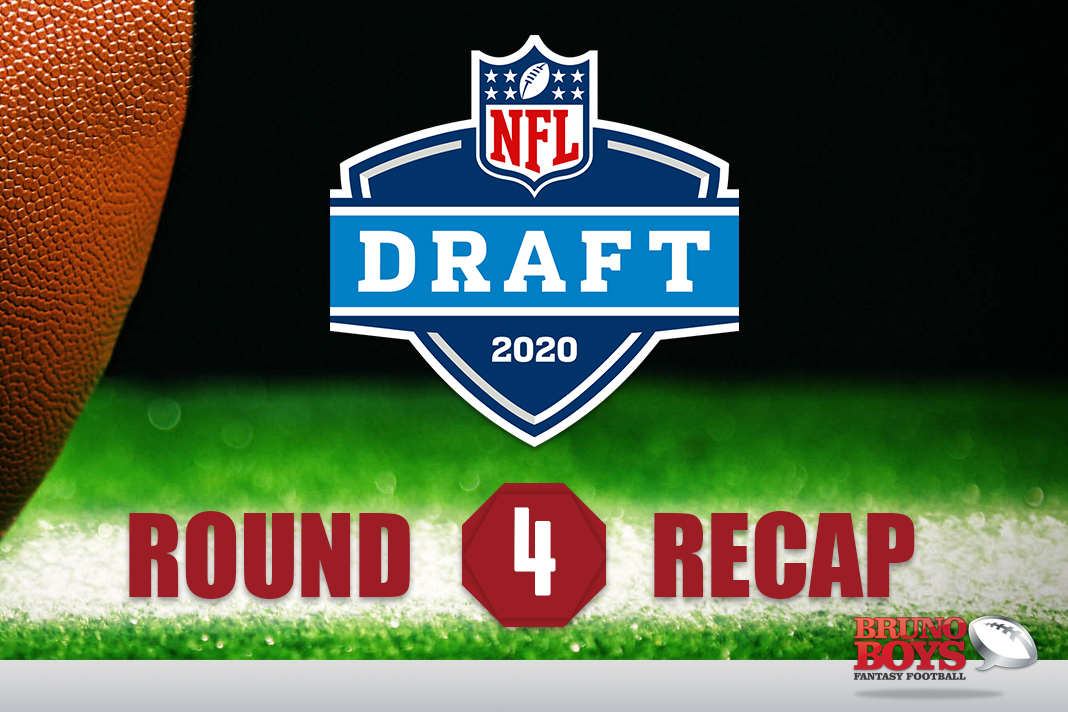 Here are the notable picks in Round 4.

112 Los Angeles Chargers select UCLA running back Joshua Kelley
With Melvin Gordon gone, the Chargers needed to fill his spot in the backfield as Austin Ekeler takes command of the carries. Kelley is in a similar mode as Ekeler though but needs to develop as a pass catcher and blocker.

***Trent Williams is traded from the Washington Redskins to the San Francisco 49ers***
It was expected that Williams would be moved during the draft but this is a big time trade for the Niners who add an elite offensive tackle. In exchange the Niners give up a 2020 fifth-round pick and a 2021 third-round pick to the Redskins. Joe Staley is expected to retire due to health concerns.

115 Cleveland Browns add TE in Harrison Bryant from Florida Atlantic
It was suspected that Kevin Stefanski would go after another tight end of his liking to pair with Austin Hooper. This puts David Njoku on notice and we will now see if he gets dealt or if the Browns decide to keep him. Bryant is a highly skilled tight end without the elite speed you’d see in a more elite prospect. The smaller school may have led to him slipping in the 4th round but that did not prevent him from winning the John Mackey Award, which goes to the nation’s top tight end.

118 Denver Broncos add another offensive weapon with Missouri TE Albert Okwuegbunam
Also known as Albert “O” the Mizzou prospect has great measurables, quality size and length but route running and separating from defenders is not a strength. If the Broncos can coach him up, he’ll be yet another skill player for Drew Lock to throw to. Noah Fant is not going anywhere but if Okwuegbunam gets on the field with Fant, look out.

120 New York Jets draft Florida RB La’Mical Perine
Perine couldn’t have dreamt of a better mentor than Le’Veon Bell. Perine is another patient runner in the same mold, but he is smaller and is a solid pass blocker. The Jets get deeper with another running back with skill and burst.

122 Indianapolis Colts draft Washington QB Jacob Eason
As one of the big quarterbacks still on the board, Eason finally went to a good home with head coach Frank Reich and learning behind Phillip Rivers. He has all the ideal size but it’s the work ethic, decision-making and inconsistencies need to be ironed out. Does this mean Jacoby Brissett is shopped? How many quarterbacks do the Colts want to have on the roster? Brissett has one season left on his contract and teams like the New England Patriots could try to get him back.

124 Pittsburgh Steelers select Maryland RB Anthony McFarland Jr.
After just two seasons at Maryland, McFarland is a one cut and sprint guy out of the backfield. He has little wear and tear, just 245 carries for 1,648 yards and 12 touchdowns but he has speed once he makes the cut upfield. With James Conner struggling to stay healthy last season, the Steelers took a complimentary back as insurance if he goes down again. He’ll have to beat out Jaylen Samuels and Bennie Snell Jr. though.

125 New York Jets pick Florida International QB James Morgan
129 New York Jets pick Charlotte OT Cameron Clark
This is in response to what the Jets dealt with in 2019 with Sam Darnold coming down with mono and Trevor Siemian and Luke Falk was left to fill the need, then Siemian suffered a serious leg break. Morgan will back Darnold up, but what this pick won’t do is push the Jets’ starter in camp. What is interesting about Morgan is that he was selected ahead of Georgia QB Jake Fromm.

As for Cameron Clark, we see another big tackle added to protect Darnold from getting sacked and that will go a long way in keeping his development on track.

126 Houston Texans draft North Carolina OT Charlie Heck
Even with Laremy Tunsil signing an extension, the Texans struggled to keep Deshaun Watson’s uniform clean. Heck has the NFL pedigree and big measurables standing 6-8, but needs to be coached up at the next level.

128 Buffalo Bills draft University of Central Florida WR Gabriel Davis
Josh Allen has a lot of receivers to throw to, but few of them are special. That’s part of the reason why he runs so much. The trade for Stefon Diggs is a game changer, and the pick of Davis adds more talent to go deep, which is where this receiver thrives. Davis is not a great route runner so he has room to grow and it’s a crowded bunch. Now the Bills just have to get Allen out of the habit of running.

133 Seattle Seahawks select Stanford TE Colby Parkinson
A John Mackey Award finalist, Parkinson fits the mold of the type of tough gritty tight ends that Russell Wilson likes to throw to over the middle. With Will Dissly’s health in question, the team signed aging veteran Greg Olsen and brought back Luke Willson. With Jacob Hollister also coming back, the 6-7 252 lb. Parkinson (who had just one drop in 2019) could signal tough decisions with Dissly have to be made.

136 Los Angeles Rams pick Purdue TE Brycen Hopkins
Hopkins is a strong route running TE that can exploit defenses down the seam. He’ll have Tyler Higbee and Gerald Everett to learn from as he develops into what the Rams want him to be. He could be a few seasons away unless he takes to blocking. Sean McVay likes using tight ends as a part of the offense though and Hopkins was the second fastest tight end in the draft.

142 Washington Redskins select Liberty WR Antonio Gandy-Golden
Here’s a nice sleeper in the making. Antonio Gandy-Golden is a big, long-strided target who may have played at a small school in Liberty, but played big, winning many 50/50 balls. He was highly productive in his two years with the Liberty Flames, catching over 70 passes and 10 touchdowns both seasons. Last season Gandy-Golden had seven straight games with 100 yards and shining through a group like the Redskins receivers is a very possible reality by Week 1.

144 Seattle Seahawks pick Miami RB DeeJay Dallas
The Seahawks were left calling Marshawn Lynch out of retirement last season so why wouldn’t they draft another running back. Durability is something to be desired and a back who can be a threat on the run and the pass. He’ll have to work on the latter and in pass blocking but he does have return skills and could contribute quickly as a special teamer.

146 Dallas Cowboys select Wisconsin C Tyler Biadasz
Travis Frederick’s retirement left a big need for an anchor for the Cowboys offensive line. Needing to keep this a strength, the Cowboys targeted Biadasz who comes from a great program for o-linemen. He’ll be competing with Joe Looney.

Be sure to check out our coverage of the 5th Round.