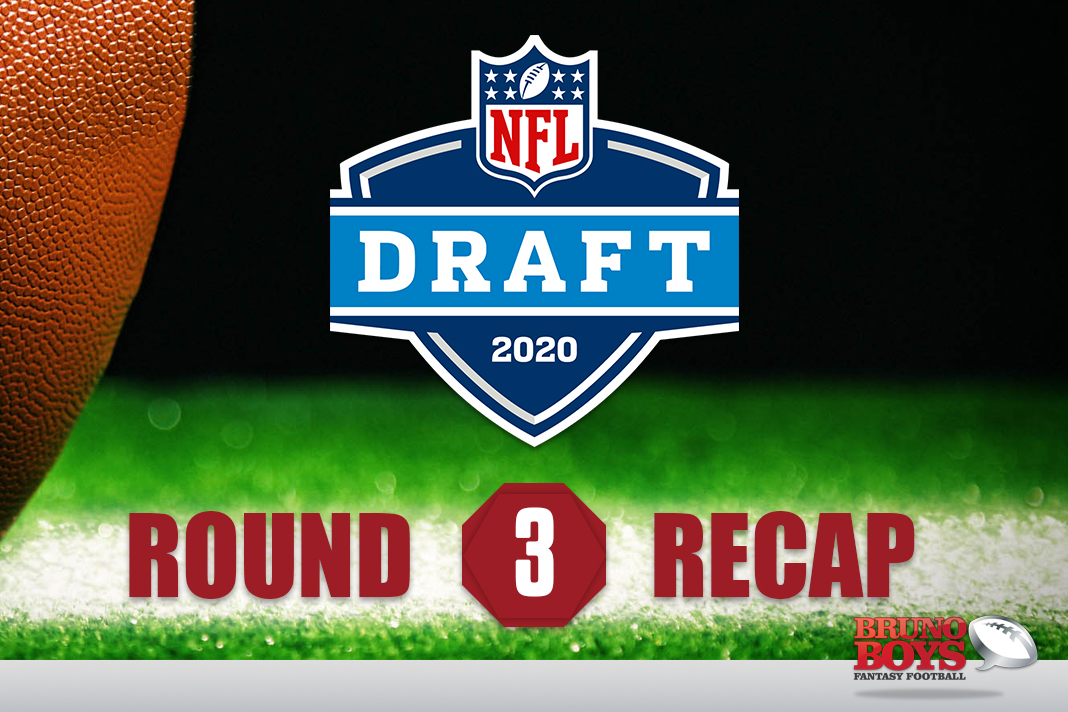 How have you been enjoying the first entirely online NFL Draft? In Round 1, we tried to break down every pick. Round 2, we zeroed in on the fantasy relevant picks. For rounds 3-7 though we’re going to try and recap each round with the most fantasy relevant selections and highlights. Here are the notable picks in Round 3.

66 Washington Redskins select WR Antonio Gibson out of Memphis.
Besides Terry McLaurin, the Redskins needed to get Dwayne Haskins more weapons and with Gibson got one of the hybrid receiver/running backs in the draft. Is still raw but is strong and speedy and will move around the field.

72 Arizona Cardinals select Houston OT Josh Jones
Kyler Murray finally gets some offensive line help, and Jones is a good pass blocker. This partially addresses one of the big weaknesses on the Cardinals. Jones had a second round grade, but slipped to the third.

76 Tampa Bay Buccaneers select RB Ke’Shawn Vaughn out of Vanderbilt
Besides Ronald Jones, there’s no one in the Bucs backfield worth a damn. Now there is. Vaughan is a little tank of runner who can run between the tackles and run through defenders and ran 572 times for 3,296 yards and 30 touchdowns in four years at Vandy. And if you wondering, he can block in passing situations.

80 Las Vegas Raiders select Kentucky hybrid WR/RB Lynn Bowden Jr.
81 Las Vegas Raiders select South Carolina hybrid WR Bryan Edwards
With back-to-back picks, the Raiders get two more receivers to join Henry Ruggs. Bowden is undersized but can play receiver or running back and quarterback. It’s a special set of skills that Jon Gruden will love to tinker with. Meanwhile, Edwards is a classic , smooth route runner with ideal size and length. His only knock is his hands.

83 Denver Broncos draft Lloyd Cushenberry III from LSU
The run on LSU offensive linemen came in Day 2 and Cushenberry was one of the more coveted interior linemen in the draft. The o-line has been a pain in the rear for GM John Elway for years and it seems like he’s been trying to fix it in the draft, fixing his own misfires.

86 Buffalo Bills select Utah RB Zack Moss
The Bills were skating on thin ice only having Devin Singletary on the roster. Yes, T.J.Yeldon and Taiwan Jones are STILL on the club, but they’ve been down that road over and over. Buffalo needed more dynamic playmaking from the position and the wealth of good backs on Day 2 was apparent. Moss is a bruiser of a back, and is tough to bring down.

93 Tennessee Titans draft Applachian State RB Darrynton Evans
Already satisfied with Derrick Henry as the thunder in the backfield, Evans looks to be his lightning sidekick. The 5-10, 203-pound back has speed and is a tough runner, and will be used as a receiver like Dion Lewis did for them in recent years.

91 New England Patriots draft UCLA TE Devin Asiasi
101 New England draft Virginia Tech TE Dalton Keene
The Pats still seem content with what they have at quarterback and receiver, and instead reload at tight end, taking two in the third. Asiasi was a transfer from Michigan where he was a top prospect before heading west. Keene looks more like a blocker of the two but we’ll see what happens after Bill Belichick is through with him. Last year the Pats got next to no production from the tight end, and they’re aiming to change that in 2020.

Also, Belichick’s dog makes an appearance on camera and is potentially influencing the picks.

105 New Orleans Saints selected Dayton TE Adam Trautman
I have to ominously put Trautman here right after the Pats picked at 101, because they went with Keene over a tight end who displayed more all around skill at the position with speed. Trautman looked like the prototypical mold they go after. That said, to get a tight end of this skill, this late in the third was robbery for the Saints who look to groom a successor to the aging Jared Cook (33) and another weapon for Drew Brees.